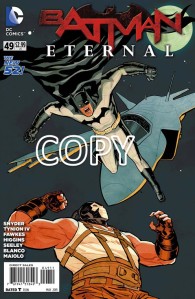 With the final four issues left our heroes start to have small victories but is this all part of the master mind’s plan? As always we begin with the cover, Batman jumps out of a fighter jet to attack Bane.  So I gather that Batman will help the Red Hood in this issue since the Red Hood has been the one fighting Bane for the last two issues. Also Batman’s billowing cape looks good behind the title. We begin our story with James Bard, Harvey Bullock, and Maggie Sawyer racing towards Blackgate Prison to stop a riot. James Bard is obviously trying to redeem himself but I don’t know if this is just an act or not.

In Blackgate Prison, the Penguin’s goons are holding Jim Gordon down as the Penguin taunts him. It’s good to see that Penguin is back in a little bit of a control position.  For a while I thought that the writers were going to change the Penguin’s character. As for Jim Gordon, there is no way he can come out of this series unchanged. Jim finds a moment of opportunity to break free of the Penguin’s goons and pounce on Penguin beating him to a pulp. This is what I mean.  I don’t think Jim Gordon before this series would do this but it makes sense why he is changing. Jim Gordon convinces Penguin’s goons to walk away while he ties the Penguin up.  I have never seen Jim Gordon this angry in a comic before.  He knows that he has nothing to lose.

We change the scene to catch up with the Bat Family to see how well they are doing on their individual missions. This feels like it has been dragging on forever.  We see this same type of scene for the last three issues. I couldn’t see why they had to spread this fight scene over this many issues when they could have easily made it its own single issue. Meanwhile, in the Bat Cave, Alfred tries to reason with Hush who is now in control of the Bat computer. Alfred knows that there is no reasoning with Hush but it is all he can do due to the fact that he is locked up. Every time Alfred asks Hush a question, Hush responds in the way a James Bond villain would.  Across town, Julia breaks into Red Robin’s hideout to use his Bat computer to contact the team. There is one question.  When did Red Robin have time to program Julia’s voice into the security system?

In another part of town, the Spoiler is being held hostage by her dad, the Cluemaster, in a helicopter. Do we really need the whups of the helicopter blades? Cluemaster tries to get Spoiler on his side but the Spoiler causes the pilot to lose focus allowing her be able to jump out of the helicopter onto a roof. As much as this scene is amazing we did not need two pages to explain it. We get a panel of a close-up of Cluemaster looking sad that his daughter will not join him but it is ruined by his ridiculous goggles spelling CluE

Back in the Bat cave, Hush is using one of Batman’s boats to try to destroy a cargo ship but Julia manages to stop him. I’m surprised there is not a battleship referenced here.  It would be great timing for one. While Hush is distracted in virtual combat, Alfred manages to escape the holding cell and sneak attacks Hush. Finally Alfred gets a good old fashioned revenge on Hush.  With this, the reader is shown how effective Alfred is in combat. Unfortunately, if you have been reading “End Game”, you will know that Alfred will get into much more trouble. Alfred knocks Hush out and runs to the computer to take control before the Bat boat can sink the cargo ship.  We also see Alfred getting in contact with the Bat Family thereby getting control back for the mission. While Alfred’s escape was spectacular it was predictable but I don’t see any other way this scene could unfold.

Alfred contacts Bluebird and the Red Hood to find out that they are not holding up well. At the last minute, Batman contacts Alfred to tell him he is on his way. Yet this is like the last page where is was predictable but the write could not do anything different. We end this issue with Batman flying towards Bane for a showdown. This ending shows a small victory for the Bat Family but also shows that the big fight is still ahead. This issue was greatly written except for the fact that the writers wrote themselves into a corner and I hope they can get out of it in the next issue.