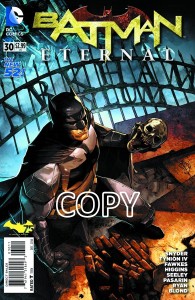 We’re half way through Batman Eternal and no one is safe in the city of Gotham, not even members of the Bat Family. As always we begin with the cover, Batman stands in front of a destroyed Arkham Asylum with a skull in his hand. This cover reminds me of Hamlet. I know it’s supposed to make me feel a bit sad but I just can’t help but laugh. Batman looks like he is wearing a new Bat suit with more armour.

We start this chapter with Batman’s view of the final events from the previous issue. He’s still in the helicopter from last issue. I thought he would be at least landed by now. Julia contacts Batman to tell him that a plane crash is about to happen due to the green light explosion from Arkham. This will be hard for Batman to handle because he needs to get out of the helicopter and get into the Bat plane. Knowing this series, Batman is likely to fail. I just see this situation as a good opportunity for Batman to have a major failure. No, I’m not saying that the plane crash will make me happy. I’m just pointing out that it’s the most likely scenario.

We cut to below Arkham Asylum, where Blackfire has completed the ritual and we see Batwing and James Corrigan magically bound. This scene is drawn like a painting from the Renaissance. As much as I like it, it’s not clear if we are looking down on the scenario or on an angle. The Joker’s daughter sneaks towards Blackfire trying to stop him as she meets a mysterious figure. I think I know who the mysterious figure is but I’m going to keep my mouth shut. We also see someone off panel telling Blackfire “no”. Unlike the last mysterious person, I have no idea who this could be.

We turn the page to find out that the person interrupting Blackfire is the Spectre. About time you showed up. I’ve been waiting twenty odd issues for this moment. You finally show up. The Spectre is drawn very well and the way he emerges from James Corrigan is amazing. The Spectre quickly attacks Blackfire and makes mincemeat out of him. I was kind of hoping for a better fight scene, not just a one-sided battle that ended in a single page. The Joker’s daughter and her mysterious figure get away while Batwing takes Jim Corrigan’s exhausted body away. It makes sense that once the Spectre returns to James Corrigan, he would be exhausted from the amount of energy it took out of him.

As Batwing and Jim Corrigan try to leave the underground tunnels, a cave-in happens crushing Batwing. Unlike Batman, I don’t know if Batwing is going to survive. I mean, his own comic book series has ended. We catch up with Batman as he attends to the plane crash victims. He watches Arkham Asylum collapse into the ground. He is worried about his partners in the building and we get a great panel of him trying to run towards the building before it is too late. What does he think? He’s Superman?

We go into the Asylum where we join Alfred as he is experiencing the collapse of the Asylum. He has a hard time believing the whole situation which is understandable. We get a glimpse of Bane foreshadowing the team-up between Alfred and Bane in the next issue. For those who don’t know DC comics, on their website they put out summaries of the next three months of their comics.

Returning to Batman, we see him struggling with the collapsing ground under him. This looks very hard for Batman and shows how strong he is physically. Batman barely escapes certain death as he tells Julia the Asylum is gone. This would be a worrying situation for anyone in Batman’s shoes. As Julia finds out the news, she becomes an emotional wreck. She obviously feels guilty about all those people dying since she helped plan their rescue.

We cut back to the underground where we see Batwing fighting for his life. We see the computer system in his suit telling us that a lot of systems are failing making us worried about Batwing. I don’t know if Batwing is going to make it. I hope he does. He prays to God as the lights of his suit go out. While I can appreciate this scene, we have seen it many times.

As Batman catches his breath, he is surrounded by the police and has no choice but to jump down into the hole. His decent is drawn well. There is a lot of interesting sights within the rubble of the Asylum. When he lands, he is met by someone who don’t know yet again. This issue has a little bit of a fetish with unknown characters speaking off panel. We end the issue with finding out that the Joker’s daughter is down in the hole with Batman wearing a dynamite vest. This is the second time an issue has ended with the Joker’s daughter attacking someone.